He didn’t have straight A’s, either.

English was, and always has been, his worst subject. His elementary teachers neglected the subject in elementary school, and instead focused on science and math, hence his difficulty in English but his ‘natural talent’ in the others.

In 6th grade, he was placed on Academic Probation at Richardson Preparatory. He was only saved due to his stellar performance in science and math.

In the second semester of 8th grade, it was as though his gears clicked and he received straight A’s. Sound like the Elijah you know yet?

Junior year, Elijah received a B in Mrs. Baker’s AP Language and Composition course. He mainly struggled with the basics to rhetorical devices. However, he was not scared of the challenge, and performed to his best abilities, while maintaining his title.

Although Elijah has pushed himself academically, he is not so sure that he’s pushed himself enough in the social realm. He was quite anti-social throughout his middle school years, and had a lack of family when his siblings began going off to do greater things in the world (ie; college, Marines). To fill the void of loneliness, Elijah threw himself into ROTC and sports, while working on increasingly becoming more social. He has also used these programs as his stress relievers, to reallocate his mind.

How does the valedictorian become the valedictorian? A lot of hard work. As Elijah’s uncle once told him, “if you want to achieve something, sacrifice something”. Although Elijah is mentally gifted in math and science, gaining the title of valedictorian was not a breeze. His whole high school career, Elijah slept 1-2 hours a night, while fighting through bouts of lost motivation and faded family support that resulted from his hectic schedule. He analyzed every teacher he had to understand their style and thus, conform his work to fit it so that he would meet (or exceed) their standards. A huge part of being valedictorian is time allocation. As Elijah explained, “I do enough to where I have a good A…”

Emphasizing time spent on his ‘struggle courses’, such as English, is a big deal to him, because those are the classes he needs to works harder in to receive an A.. He also holds true to his motivations in life – his siblings. His older sister has always been mentally gifted, and thus has proven to have a bit of sibling rivalry with Elijah, with her always claiming, “I’m smarter than you.” He has tried time and time again to prove himself to her, and show her that he was speaking the truth when he stated, “I can be smarter than you.” His other sister is quite artistic, and Elijah joined Digitech for three years to support her in it. He also became her guinea pig for all of her practice makeup looks. Quintin, Elijah’s brother, is a U.S. Marine, and Elijah has joined ROTC to support him as well. He also supports his brother with things such as PT, where they run upwards of three miles. He ultimately is a big family person, and feeds off of the motivation that comes from family rivalry and support.

What advice could Elijah possibly offer to those of you underclassmen striving to be in his position? Have great time management. You must allocate the correct amount of time necessary to every course. Acknowledge that achieving this is going to be hard, because it has to be. Join things on campus because you can’t always be alone. Everyone struggles, and it’s okay to do so – it means you’re learning. Ultimately, admitting your own mistakes is admitting your progression. Do NOT think you have to take every AP course in the school. It’s not required, and certainly not expected of you. Most importantly, be less selfish, and more selfless.

Elijah’s most memorable high school experience was what first came to mind – Nathan Hunter bringing Taco Bell tacos to a CSU Chemistry lab in Junior year – because it was so abrupt and unexpected. He will miss high school, but is looking forward to the future.

After graduation, Elijah is headed to Cal State San Bernardino. While he could have attended “more prestigious” colleges, he chose Cal State SB because he received a full-ride scholarship. He said he didn’t see the point in beginning his life after graduation in debt. 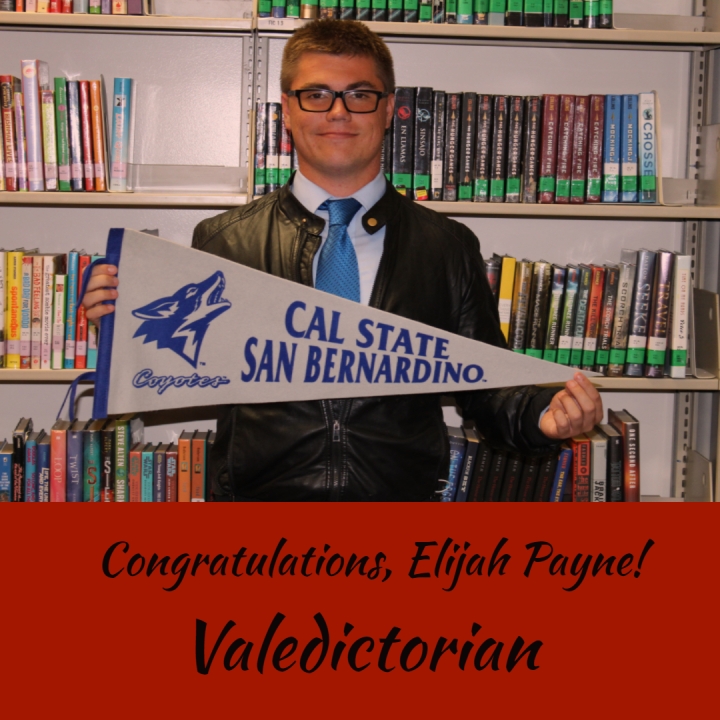 Just a high school senior with dreams of a big future. View all posts by Destiny Aguilera