Xavier Palacios did not grow up with the incredible support system he has now. He now acknowledges the fact that he is important and “not a waste of a human being.” Xavier is currently struggling with believing in himself because he does not see the immense potential he has to become the person he is destined to be.

In the past, Xavier painted an awful image of himself that he began to believe after bullies made rude comments upon his appearance. “I’ve come to a conclusion that there is no such thing as haters, they’re your motivators.” Now, he has grown into an amazing friend, student and athlete despite undergoing multiple tough situations. However, it was not easy for him to accept change. But, everyone needs to do so at one point, and because of this he is now an unbothered, self-centered person with tough skin.

Growing up, Xavier was that family member whom no one thought was going to make it and many worried about him. These negative people led him to his lowest point but he never really accepted the help from others, including his family’s. His family was only there for the bad days or when he allowed them to be because he never permitted himself to open up.  He helped himself through his darkest times by being a comfort and a supportive friend to himself.

Xavier then accepted reality and began to encourage himself to do more than what was expected from him. “I owed myself more than to give up. Of all the reasons to stay, the most important is rather simple, I mattered.”

For this reason, Xavier is proud to see the person he has grown to be. His good friend Sofia Ruiz once told him, “Everyone goes through a winter, but you must always carry an umbrella through the storm. Spring is around the corner and you will blossom with the flowers.”

His advice to those who feel hopeless is to create a support system that they are comfortable with, understands them, and knows the true person they are. Creating a support system or at least having someone they trust will help them to not isolate themselves from their current issues and their support system will assist in changing their life and mindset into the better.

“You can’t change your past, you can only move forward. Believe in yourself for you are worth so much more than you think.” he said.

Now, everyone knows that Xavier is going to make it in life. He changed himself into the person he wanted and knew could be.

“In the end, all of my experiences I’ve encountered only molded me into a person that will never be able to be broken ever again,” he said. “These experiences were only obstacles.”

Xavier does not always show it, but he is also insecure because he is unsure of the progress he’s made. Nevertheless, he always portrays his true self.

With Mr. Cardinal, Xavier wants to better the community of San Bernardino by being a voice to those who have ever encountered similar situations to what he has endured. Xavier would like to make a change in his community because he now has the potential, the will, and the heart to really impact the change we have all been looking for.

“Mr. Cardinal would give me that connection with my community and show everyone that I can make a change!”

Xavier has gained knowledge about the real world and this has only made him put himself out there and seek the best out of people. 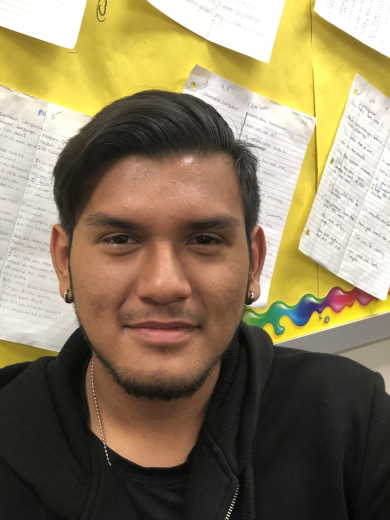 I use my right to free speech. View all posts by Sofia Ruiz